There has been a church building at Elford since the early 12th Century, but the church that you see today is the fourth incarnation. The first church was a small Norman construction with large and massive arches and a small doorway in the North wall. These features disappeared when the church was almost completely rebuilt in the 19th Century and today no trace of the old Norman Church remains.Sir Thomas Arderne, a companion in arms to the Black Prince, was lord of Elford in the second half of the 14th Century. He restored, enlarged and altered the church in the style of that period.

A century later, the lordship of Elford had passed to the Stanley family, the same family who by switching allegiance from Richard III to Henry Tudor enabled the latter to win the battle of Bosworth in 1485 and become Henry VII. Sir John Stanley added the South Aisle and Chantry Chapel to the original church.

Apart from the erection of the present tower in 1598, to replace the Norman tower which was in danger of collapse, no more building work took place until the middle of 19th Century. By this time, the building had been allowed to deteriorate to such an extent that the decision was taken to renovate it almost completely, rebuilding the walls from the footings, but following the exact ground plan of the previous church. The main movers in this work were the Rev Francis Paget, the Rector of Elford and his cousin, Hon. Mary Howard, lady of the Manor and descended from the Earls of Suffolk. Paget was an adherent of the Oxford Movement, which sought to reintroduce into the church the colour and imagery which had largely disappeared during the previous two centuries.

In 1850 the nave and chancel were rebuilt to a design by Anthony Salvin. Twenty years later the Chantry Chapel and Chantry Nave were restored by G E Street. Both restorations were influenced heavily by Paget and the result is the highly coloured and decorated church we see today.

Elford has some of the finest alabaster tombs in the county. Fortunately the church escaped the damage often caused during the Reformation and the Commonwealth and the tombs were hidden from those who sought to destroy them.

Commissioned in about 1400 in memory of Sir Thomas Aderne, it shows Sir Thomas in armour together with Lady Arderne. The details of the carving and the condition rank it as one of the finest tombs of the period. 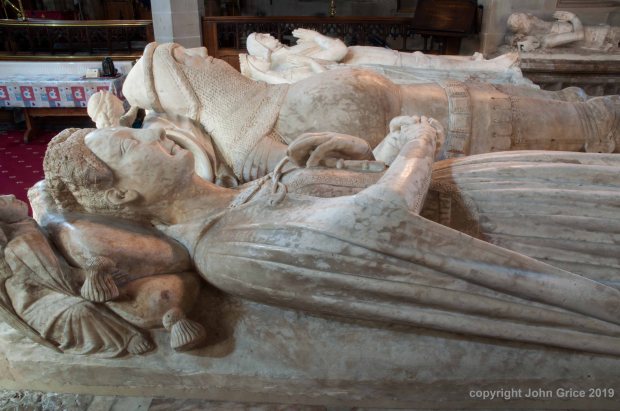 Commemorates Sir John Stanley, the founder of the Chantry Chapel and made c1474.

This tomb, which appeared in the 1520s, is unusual in that Sir William Smythe, who married into the Stanley family, is shown with his two wives, Anne Staunton and Lady Isabella Neville.

Another most unusual tomb which was placed in the church following the death of Sir John Stanley’s grandson who was hit on the head by a real tennis ball and died of a brain hemorrhage. The tomb is carved of millstone grit and shows the boy pointing to his forehead with the inscription ‘Ubi dolor, ibi digitus’ (the hurt was where the finger is).

Yet another interesting tomb, as this is a very rare instance of a semi-effigy where only the head and the feet were carved. It lies in the sanctuary of the church.

Most of the glass in the church dates from the last restoration in the 19th Century, but nevertheless is interesting in that many of the windows are copies of earlier styles. The two windows in the North wall of the nave are copies of 11th Century Celtic floral designs. The window behind the font depicting members of the Arderne family is a copy of a 14th Century window originally sited in the nave wall. The 19th Century window was designed using records of the old window held in Blithbury Hall.

The East window in the Sanctuary is a copy of 13th Century French glass similar to that in Sainte Chappelle in Paris with the same purple colouring.

There are two windows of older glass which have survived the various restorations.

The first is in the South wall next to the main entrance and is the last of the glass from Sir John Stanley’s original Chantry Chapel. The window shows Tudor roses, crowns and portcullises.

The second window is on the West wall by the entrance and shows a scene of the Presentation of Mary in the Temple. Tradition has it that it came from a convent in Germany and, although there is no documented proof as to its origins, experts have identified it as medieval glass from the Rhineland area. It almost certainly came from the continent at the time of the French Revolution in the 1790’s, saved from destruction at the hands of the Revolutionary armies. Its subject makes it likely that it came from some religious institution such as a convent or nunnery.

Church Warden:
Are you interested in becoming a church warden at Elford? The position is vacant.

whose glory is around and within us:

open our eyes to your wonders,

that we may serve you with reverence

and know your peace at our lives’ end,

through Jesus Christ our Lord.